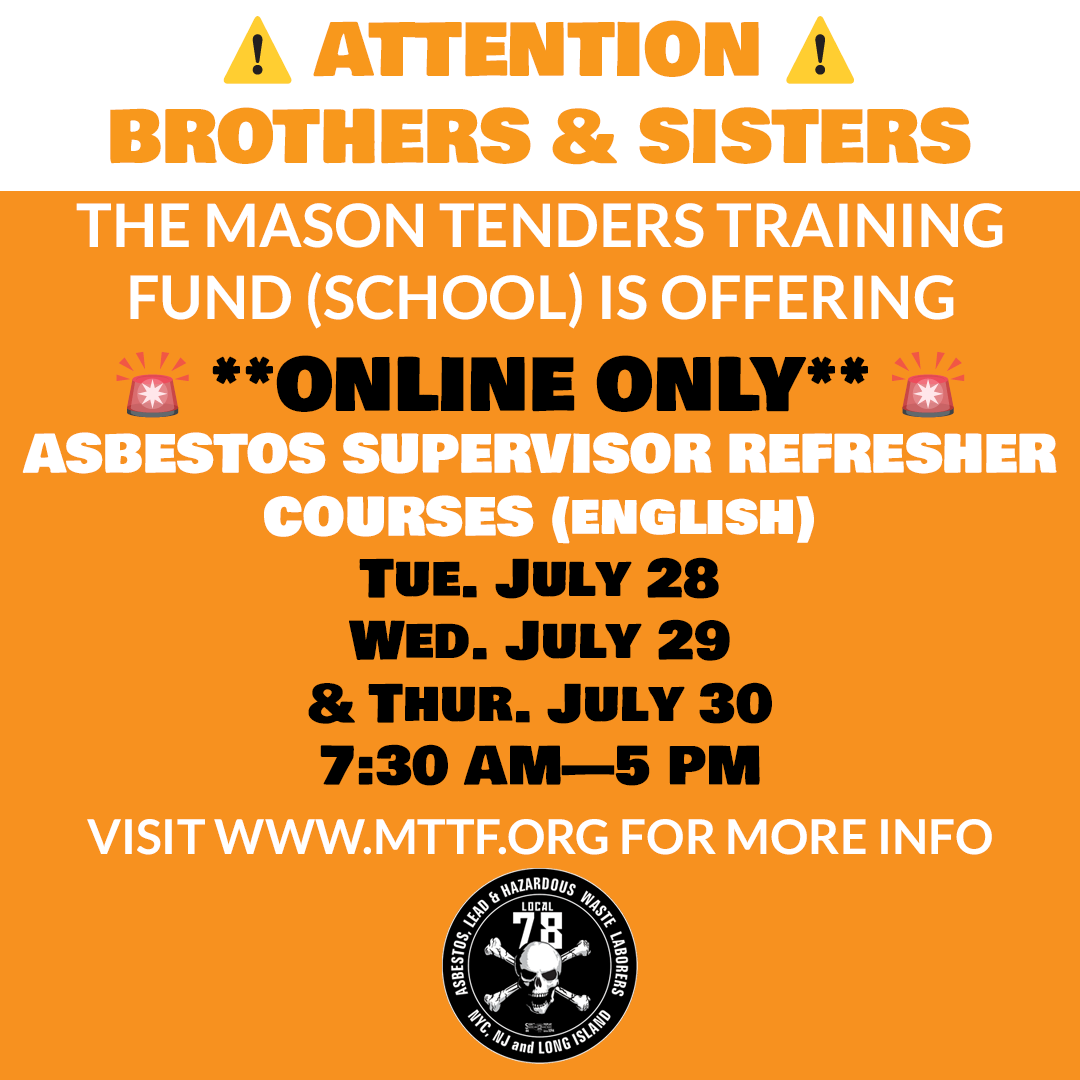 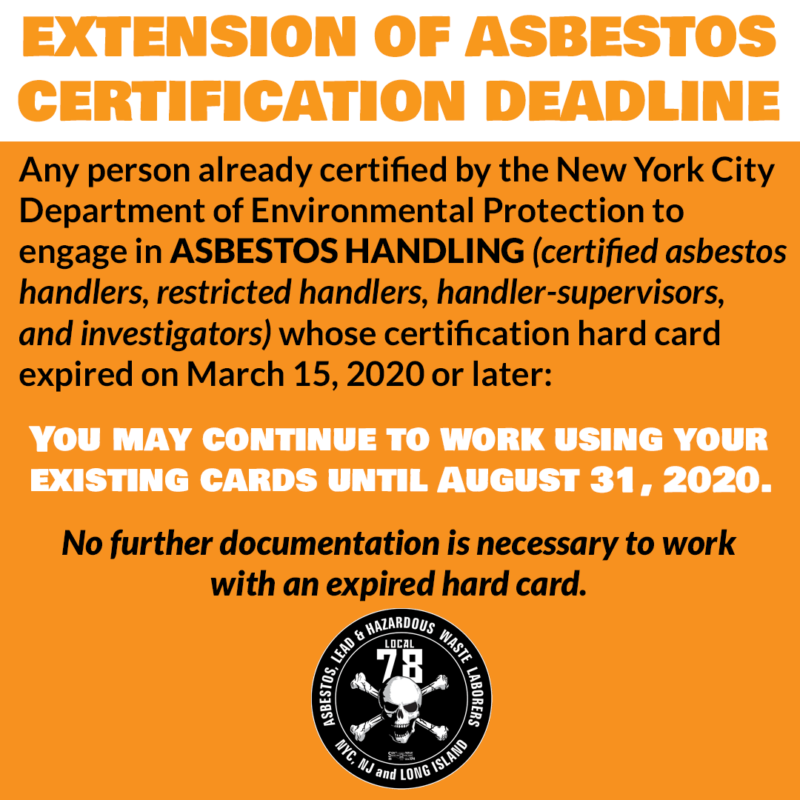 Per the New York City Department of Environmental Protection:

Any person already certified by the NYC DEP to engage in ASBESTOS HANDLING (certified asbestos handlers, restricted handlers, handler-supervisors, and investigators) whose certification hard card expired on March 15, 2020, or later, may continue to work using their existing cards until August 31, 2020.

No further documentation is necessary to work with an expired card.

A LETTER FROM
DEPUTY SUPERVISOR GRUCHACZ 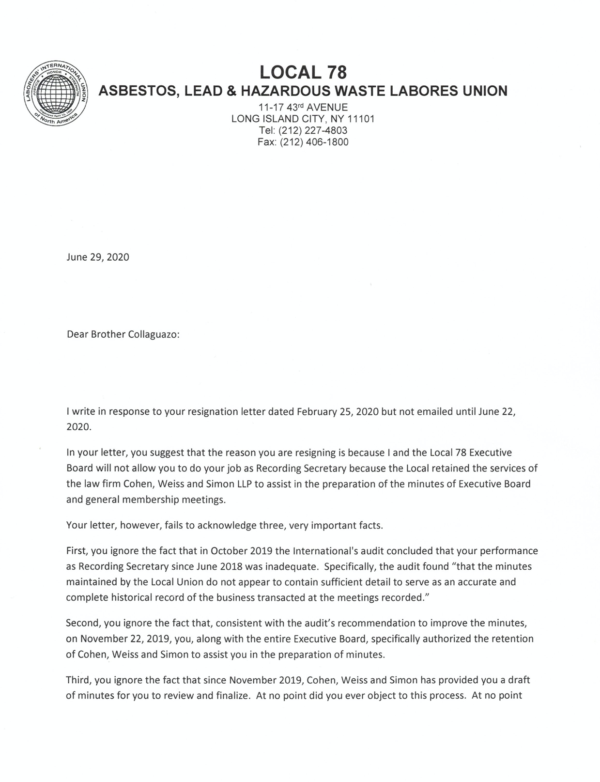 In your letter, you suggest that the reason you are resigning is because I and the Local 78 Executive Board will not allow you to do your job as Recording Secretary because the Local retained the services of the law firm Cohen, Weiss and Simon LLP to assist in the preparation of the minutes of Executive Board and general membership meetings.

Your letter, however, fails to acknowledge three, very important facts.

First, you ignore the fact that in October 2019 the International’s audit concluded that your performance as Recording Secretary since June 2018 was inadequate. Specifically, the audit found “that the minutes maintained by the Local Union do not appear to contain sufficient detail to server as an accurate and complete historical record of the business transacted at the meetings recorded.”

Second, you ignore the fact that, consistent with the audit’s recommendation to improve the minuets, on November 22, 2019, you, along with the entire Executive Board, specifically authorized the retention of Cohen, Weiss and Simon to assist you in the preparation of minutes.

In short, it is simply inaccurate for you to contend that somehow, I or the Local 78 Executive Board prevented you from doing your job. The fact that your June resignation letter is dated February 25 and misspells my last name simply confirms that you were either unwilling or incapable of performing your duties as Recording Secretary.

In an effort to improve the taking of minutes, a paralegal from the law firm of Cohen, Weiss and Simon LLP will assist the Recording Secretary at both Executive Board meetings and general membership meetings.

A MESSAGE FROM
DEPUTY SUPERVISOR GRUCHACZ

In order to stop the spread of misinformation, please read the attached document from the Mason Tenders’ District Council Welfare Fund stating where we currently stand with regard to Welfare eligibility hours. There have been no new changes since March. The text of the letter has been reprinted below and can be viewed HERE.

To:       Fund Participants who are Members of Asbestos, Lead & Hazardous Waste Laborers Local 78

From:  Board of Trustees, Mason Tenders’ District Council Welfare Fund (the “Welfare Fund” or “Fund”)

This is an important update to the Welfare Fund’s January 2020 notice concerning the Fund’s eligibility rules for members of Asbestos, Lead & Hazardous Waste Laborers Local 78 (“Local 78”). Please take the time to read this Notice carefully, and keep it with your copy of the Fund’s Summary Plan Description (“SPD”).

As the fund advised participants in its January 2020 notice, the Board of Trustees amended the eligibility rule for participants who work under the jurisdiction of Local 78 to require 1,100 hours of work, effective as of the coverage period beginning on January 1, 2021. Under the new rule, members would be required to work at least 1,100 hours during the 12-month period beginning November 1st through October 31st in order to gain eligibility for one year of coverage the following January 1st through December 31st.

After further consideration, the Board has decided that the annual work requirement for one year of coverage under the fund will be 1,000 hours (instead of 1,100 hours). The 1,000 hour rule will be effective beginning with the work period November 1, 2019 – October 31, 2020 (For coverage under the Fund for calendar year 2021) and for future periods.

All of the other rules and provisions in the January 2020 notice remain unchanged, including the rules regarding the conversion ratio for crediting eligibility hours worked under the Local 78 Residential Side Letter – members performing work covered by the side letter will receive a half-hour of credit under the Fund of each hour of work at the reduced contribution rate, which means that a member will need to work 2,000 hours under the Residential Side Letter in order to be credited with the 1,000 hours for Fund eligibility purposes for the coverage period beginning January 1, 2021.

If you have any questions regarding the information in this Notice, please contact the Fund Office.

WE NOW HAVE CLOTH MASKS
FOR OUR MEMBERS 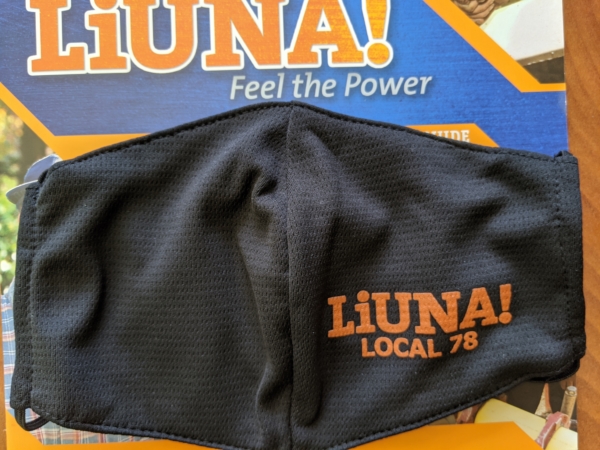 You can pick them up at our offices at 11-17 43rd Avenue Long Island City, NY 11101, or you can talk to your Shop Steward on site to bring them to your work place.

Thank you and Stay Safe!

This is to clarify the rumors regarding higher rates on COVID-19 projects spread in our industry:

Local 78 has signed an agreement with Environmental Contractors Association (ECA) regarding COVID-19 clean ups on hotels in the City. This agreement is intended for use only on the buildings owned by Hotel Association. The rate on those projects would be $5 higher than regular rate. Unfortunately, at this moment, there is no actual work being performed.

A MESSAGE FROM
DEPUTY SUPERVISOR GRUCHACZ

Brothers and Sisters of Local 78:

I hope you and your families are all well, staying safe, and following the necessary guidelines to protect yourself and your family.

To say we are living in a crazy, uncertain time is an understatement. We have all experienced great challenges in our lives—the days following 9-11 often come to mind. But today we are facing challenges different than anything we have faced before. The coronavirus pandemic has hit us hard in the country and especially hard in the New York/New Jersey region. Think about it:

These numbers can be overwhelming to comprehend. But they are real and there is much we need to do to help stop the spread. The more we do now, the sooner we will get back to our normal lives and work.

As you know, as of today, much of our work has stopped. Our work is dangerous under normal circumstances, but given today’s crisis, it is impossible. For sure, some limited work continues. Emergency work is being handled. But it is nowhere near enough for all of us.

There are certain things your union can do to help you during these tough times.

First and maybe most important we can be a source of true, safe information. During these times rumors are often taken for fact and travel at a record speed. I urge you not to believe everything you hear and read, especially on social media.

If you have any questions or concerns, please contact the union. We will always be there to provide accurate, factual information. Rumors and gossip can only add to the problems and confusion.

Our trust funds, health and safety, LECET are all working to provide help and support. If you are laid off, there is help available—beyond the standard New York State unemployment insurance.

Hopefully in the next few weeks, we will begin to see an opening up of our economy. That will mean that some of our jobs will open up. But one thing will not change, you have my solemn pledge that our members’ health and safety will always be the top priority of this union.

Until then I urge you to stay safe and keep in touch. As always, the officers and staff of Local 78 are here for you.

Thank you and God bless you.

A MESSAGE FROM THE
MASON TENDERS’ TRAINING FUND

ALL MEMBERS
WITH A
LIMITED SST CARD MUST COMPLETE
THE ADDITIONAL 10 HOURS OF SST TRAINING
BY SEPTEMBER 1, 2020
OR YOU CANNOT WORK!

As it would be less than responsible under the current conditions to conduct classes in the conventional manner at the school in Long Island City, your Training Fund has found a way to provide you with live Instructor led online training in many of the courses that you and many other members want and need.  And you can do it from home through a method of distance learning.

Through the Zoom platform, members can enter a virtual classroom with a live video view of their Instructor and other class participants, interact with them, ask questions, and more.  In effect, you are in the classroom. And, you can use your home computer, iPad or other tablet, or even your cellphone! All of these devices work with Zoom.

All class registration will be done via email

Do not call the school to enroll

Send the email to: e-register@mttf.org

If there is room in the class you chose, you will be sent an email inviting you to a Zoom meeting describing the course and time.  You must then register in Zoom.

A MESSAGE FROM THE
MASON TENDERS’ DISTRICT COUNCIL
TRUST FUNDS

IMPORTANT MESSAGE REGARDING NEW HARDSHIP DISTRIBUTION OPTION DUE TO COVID-19

The Board of Trustees has adopted a new Annuity Fund hardship withdrawal option to assist participants during this difficult time while they face unforeseen financial consequences due to the COVID-19 pandemic. Under this option, an active (non-retired) participant may apply for a one-time withdrawal of $10,000 from their account (or their entire account balance, if the balance is less than $10,000). Eligible participants may submit an application to the Fund Office at any time from now until June 10, 2020.

Applications may be submitted by mail to the Fund Office at Mason Tenders’ District Council Trust Funds, 520 Eighth Avenue, Suite 600, New York, NY 10018-4196. Participants will be required to complete a certification along with the application. (Here is a link to the application and certification, or you may send an email to pensionannuity@mtdctrustfunds.org to request that the Fund Office send you the application and certification.) As with all Fund withdrawals, spousal consent will be required if a married participant’s account balance is or at any time was more than $5,000.

Note that some of these withdrawals may qualify for certain tax relief under the new federal CARES Act — waiver of the 10% early distribution tax penalty and payment of income taxes on the distribution over a three-year period. Participants should consult their tax advisors for advice regarding the tax consequences of any withdrawal. The Fund does not (and cannot) give tax advice.

As per the usual Fund rules in accordance with federal law, participants (and their spouse, if married) must have their signature notarized in order for their application to be processed. We recognize that some participants may be unable to go to a notary at this time but a number of states (including New York) offer virtual or remote notarization to assist individuals during this time. (This link may be helpful in that regard: www.nationalnotary.org/notary-bulletin/blog/2018/06/remote-notarization-what-you-need-to-know.) The availability of virtual notarization should be of great assistance to members who need it.

Laborers Local 78
Added photos
Do you recognize them?
Local 78 members worked in the clean up efforts two days after 9/11 at ground zero.
If you have old pictures, share them with us to
paperwork@local78.org
#neverforget 2 Comments

Liuna Threezerofour Unsung heroes, not celebrated, not praised or acclaimed. We thank you brothers and sisters for all you’ve done.

Laborers Local 78
Added photos
Working people must demand Congress and our elected officials do their job: pass the HEROES Act! #1U #WorkersFirst 1 Comments

Laborers Local 78
Added photos
19 years ago, a local 78 member working in downtown Manhattan.
Got old pictures in a jobsite? Share them with us to paperwork@local78.org 35 Likes