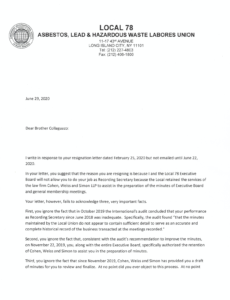 In your letter, you suggest that the reason you are resigning is because I and the Local 78 Executive Board will not allow you to do your job as Recording Secretary because the Local retained the services of the law firm Cohen, Weiss and Simon LLP to assist in the preparation of the minutes of Executive Board and general membership meetings.

Your letter, however, fails to acknowledge three, very important facts.

First, you ignore the fact that in October 2019 the International’s audit concluded that your performance as Recording Secretary since June 2018 was inadequate. Specifically, the audit found “that the minutes maintained by the Local Union do not appear to contain sufficient detail to server as an accurate and complete historical record of the business transacted at the meetings recorded.”

Second, you ignore the fact that, consistent with the audit’s recommendation to improve the minuets, on November 22, 2019, you, along with the entire Executive Board, specifically authorized the retention of Cohen, Weiss and Simon to assist you in the preparation of minutes.

In short, it is simply inaccurate for you to contend that somehow, I or the Local 78 Executive Board prevented you from doing your job. The fact that your June resignation letter is dated February 25 and misspells my last name simply confirms that you were either unwilling or incapable of performing your duties as Recording Secretary.